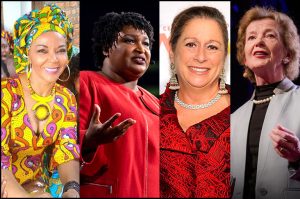 What did you think when you saw this headline?! Do you, like me, find the descriptor ‘dangerous women’ both thrilling and vaguely unsettling?   I recently attended an open session for an exciting new women’s peer leadership group She Leads Change, where we were invited to imagine ourselves in 10 years time and to speak as if from 2030 in answer to the question ‘what have you been doing for the last decade?’  I answered ‘I’ve spent the last 10 years becoming a dangerous woman’.

Laughter followed.  And a good deal of very interested comment.  I have to say I had rather surprised myself too. The idea – and the wish – came from a TED talk I’d watched a few days before, one that has triggered deep thinking about how we define and use power.  Like so much else our concept of power derives from the ‘default male’ perspective, which has a tendency to lead to conflict rather than consensus and has not served us particularly well over the centuries.  And particularly of late.

So watching Pat Mitchell was a wakeup call, alongside reading Caroline Criado Perez’ FT Award-winning ‘Invisible Women’, which reveals the yawning gap in vital data which (yet again) is based on ‘default male’ perspectives and automatically turns 50% of the world’s population into a niche category called ‘women’.  We know that consistent data informs our thinking in myriad ways. And we know that what’s consistently available to us becomes normal. It seems to me that 2016-2019 has demonstrated beyond reasonable doubt that our normalised systems of power are totally dysfunctional, and that we’ve reached a point of critical mass that demands change.

So Mitchell’s statement that  ‘In the 21st century women will change the nature of power, rather than power changing the nature of women’ feels about as true and urgent a call to action as I can imagine at the start of a new decade.  Particularly after a year in which many powerful women in Parliament resigned because they could not bear to stay under current conditions.

So now I’m asking myself this urgent question:  If I knew that as a woman and TE practitioner I can change the nature of power, where would I start?’  I think with an invitation to other women, and to men too, to meet to discuss this topic, using the Thinking Environment to find a way through our differences of opinion.  The purpose being to start changing the nature of power. Now there’s an ambition for 2020 and beyond.